In recent years, the research and application of enzyme preparations in various fields have attracted much attention, and major breakthroughs have been made. Many purified and stable enzyme yields have successfully come out at home and abroad. In my country, biological enzyme preparations belong to the sunrise industry. From research exploration to work, the author, as a practitioner in this industry for many years, shares some content and feelings about the direction of bio-enzyme catalysis in biosynthesis. This article will start from：

The three aspects share some content of bio-enzyme catalysis to promote the development of green synthesis industry.

1.The Trend of the times:

First of all, the best entry point for biological enzyme catalysis technology lies in our pharmaceutical market. As you all know, our current drugs are mainly divided into two types:

Primary drug and Generic drug. Many of the research and development and production of primary drug are in the hands of some large pharmaceutical companies in Europe and the United States. Due to the protection of patent rights, the prices on the market are very high; with the expiration of the patents of these primary drug, many companies, especially those in developing countries Begin to imitate these original drugs, which is what we usually call "generic drugs", because the quality and efficacy of generic drugs are almost equal to the original drugs, but the price is usually only 15%-20% of the original drugs, so generic drugs are The world has a considerable market size. 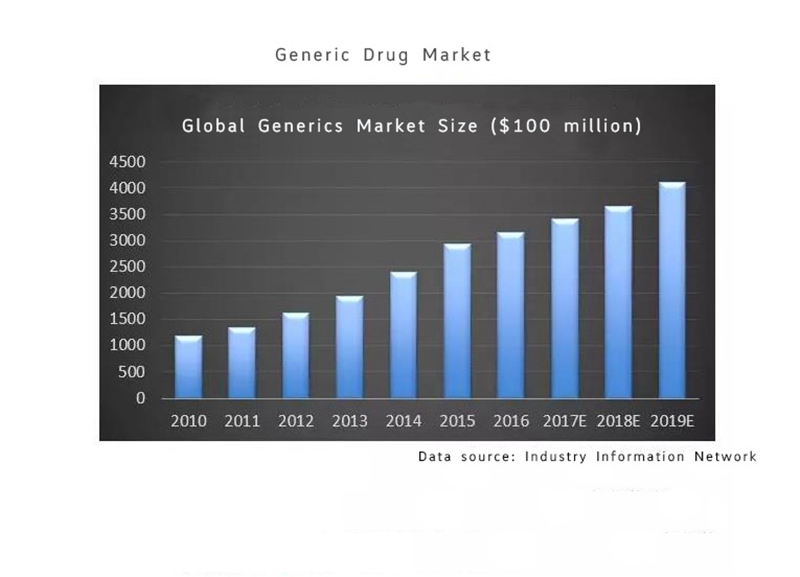 As we can see from the figure, starting from 2010, the global generic drug market has been increasing year by year. It is expected that by 2020, the market size of generic drugs will increase 4 times within 10 years without a problem.

However, when we carefully observe the current situation of many domestic pharmaceutical companies, especially those traditional chemical pharmaceutical companies, we cannot maintain an optimistic attitude. Air pollution, water pollution and soil pollution caused by waste gas, waste water and waste residues are often reported. As we all know, the government now pays more and more attention to environmental protection, and constantly introduces new policies to eliminate and strictly control the generation of these pollution's. 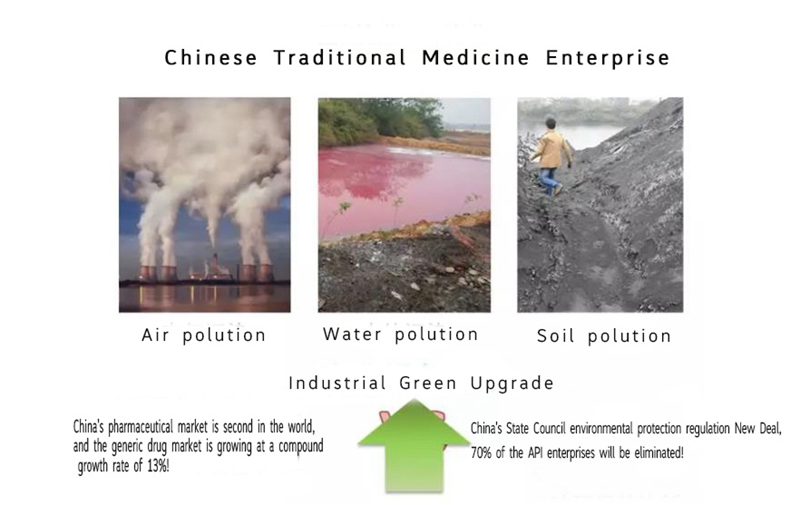 So now China pharmaceutical companies are facing such a severe contradiction, that is, although China's pharmaceutical market ranks second in the world after Europe and the United States, the generic drug market is rapidly increasing at a compound growth rate of 13%; but another On the one hand, the State Council continues to increase environmental protection measures, and it is estimated that 70% of API companies will be eliminated due to environmental issues! Therefore, under such a general background, we urgently need to green upgrade the existing pharmaceutical companies and industries, so as to avoid being eliminated, occupy and maintain this huge market.

In fact, the concept of "green chemistry" was put forward internationally in the 1990s to deal with and solve various environmental problems in chemical synthesis. Therefore, it also applies to the issue of green upgrading of chemical medicine synthesis that we are involved in.

There are a total of 12 principles of “green chemistry” proposed internationally, among which I have listed some key points: for example, prevention of pollution takes precedence over treatment of pollution after the fact; high atom economy must be considered, which is to reduce impurities and impurities in the process as much as possible. By-products; in addition, there are reduction of energy consumption, selection of renewable raw materials, high-efficiency catalysts, comprehensive waste management, etc. Based on these principles, what measures can we take in specific methods?

The most typical example of biocatalysis to achieve green drug synthesis is the synthesis of cephalosporin antibiotics. 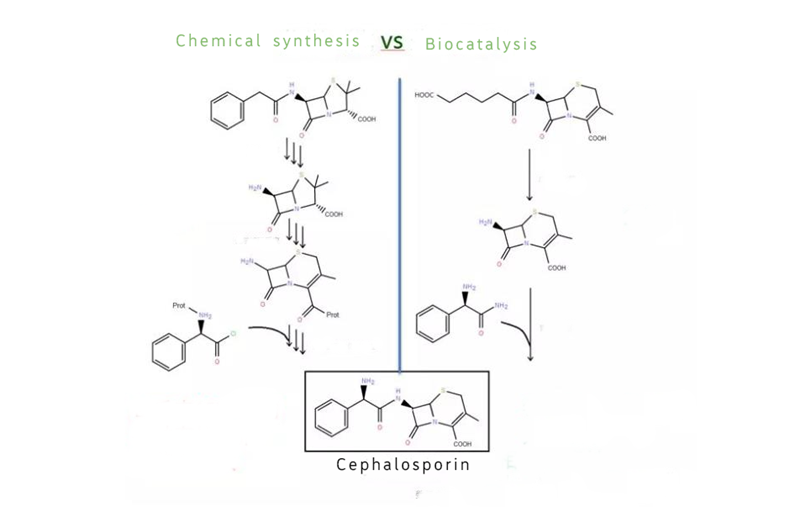 The traditional chemical synthesis on the left is generally achieved through 13 complex chemical steps; while on the right, it can be achieved only through a 2-step enzymatic method based on specific fermentation materials, and the waste generated per kg of product is changed from the original The 15kg is reduced to 5kg, and the use of various organic reagents is reduced. Because the biocatalytic reaction here is only carried out in the inorganic salt water phase, the biocatalytic method has low process toxicity, and more importantly, it is realized by the biocatalytic method. The production cost of cephalosporin antibiotics is basically half of that of chemical synthesis, so this biocatalytic process obviously has a very obvious advantage in the production of cephalosporin antibiotics.

In fact, biocatalysis technology has experienced three waves from its budding to industrialization. 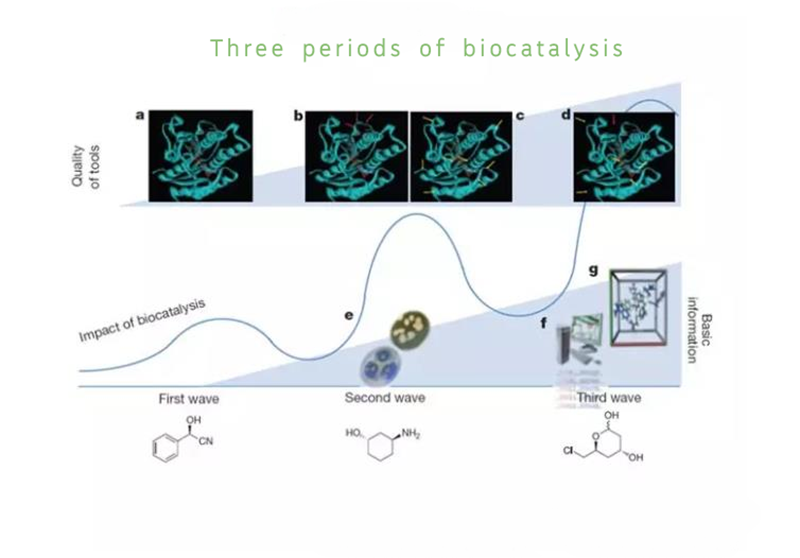 The first wave occurred about a century ago. Scientists discovered that certain components of living cells can be used for chemical transformation. This period is still in the laboratory stage, which can be regarded as the budding stage of biocatalysis.

The second wave occurred in the 1980s and 1990s. The rise of protein engineering has broadened the range of substrates for biological enzymes. The field of biocatalysis has broadened to the fields of non-natural pharmaceutical intermediates and fine chemicals. It was mainly on a small-scale trial scale, and large-scale industrial production was not formed.

The third wave occurred in the mid to late 1990s. In particular, the directed evolution technology invented by Professor Frances Arnold has greatly changed the efficiency of protein engineering of biological enzyme catalysts, and is accompanied by the cost of gene synthesis and sequencing. With the decline and the development of computer-aided molecular simulation technology, biocatalysis technology has greatly broadened its application value. At the beginning of this period, the scale of industrialization of products involving biocatalysis technology began to appear.

Biocatalysis includes biological enzyme catalysis and whole cell catalysis, but in the final analysis, the core of biocatalysis is its biological catalyst-enzyme. Everyone should be aware of the nature of an enzyme. It is a protein or nucleic acid with biocatalytic activity. Of course, the catalysis of nucleic acid RNA was also discovered later. It is called a ribozyme. The quantity and application are still very small, which is beyond the scope of today's discussion. .

The characteristics of enzymes, it has catalytic specificity and high efficiency, especially the stereoselectivity is unmatched by many chemical catalysts. In addition, it also has low reaction conditions, which can react efficiently under normal temperature and pressure. Inhibitors, activators and transformations regulate activity, and enzymes themselves are biological macromolecules that can be degraded naturally, so they are non-toxic to the environment.

At present, the application of biological enzymes has been quite extensive. The largest application field of industrial enzymes is the detergent field. The washing powder we use every day contains enzyme components. At present, more and more laundry detergents are also added with enzymes to enhance the washing effect. In addition, enzymes are also widely used in food, feed, textile, leather, paper and other fields. The largest application field of enzyme preparations involved in biological enzyme catalysis is the pharmaceutical industry.

The biological enzyme catalysis process is basically carried out by this process. First, the production of biological enzymes is achieved through fermentation; the raw materials are pretreated in the reaction tank or reaction column through the enzyme catalyzed reaction to produce the products we need, and then pass through the crude product. Purification becomes the final product.

Here are some examples of famous pharmaceutical products involved in biocatalysis technology. For example, Pfizer's atorvastatin and Merck's sitagliptin are Western medicines with huge sales. They all use specific enzyme preparations in their synthesis, and their catalytic sites are marked in red. It can be found that many well-known international pharmaceutical companies have introduced biocatalysis technology in their products and achieved industrialization scale. However, the application of biocatalysis in the production of chemical drugs is not widespread in our country.

The following two examples are used to explain part of the application of enzyme catalysis technology in my country. As a domestic company specializing in biocatalysis production and technical service, Bontac Biotechnology has many examples of biocatalytic technology transformation chemical drug companies to achieve green product upgrades.

Through the technical cooperation of Bontac Biological, we developed a one-step enzymatic process. There is no need to add special equipment to the other party to eliminate corrosive and toxic reagents. Because the reaction conditions are mild, energy consumption is reduced. Due to the characteristics of enzyme catalysis, pollution is greatly reduced, and production costs are reduced. above 50. At present, the company has started normal production last year and has achieved very considerable profits.

The second example is the biocatalytic process modification service of ursodeoxycholic acid.

Starting from CDCA through Bontac Biological, the development of ursodeoxycholic acid biological enzymatic process was realized through two-step enzymatic method and coenzyme cycle, and the acceptance of ten kilogram-level projects was realized in only three months, and the ee value was as high as 99%. The conversion rate is also over 99%, and the product quality meets European standards. The most important thing is that the cost has been reduced by 27%. It has helped the service company to establish a production line with an annual output of 100 tons, with annual sales of 200 million yuan.

Of course, although the biocatalysis industry has a bright future, my country's industrialization challenges are not small.

First of all, although the green upgrade market for chemical drug products using bio-enzyme catalysis is huge, it is still in its infancy stage; in addition, companies with biocatalysis technology are relatively scattered, small in scale, and supply and demand information is relatively fragmented. It also only stays in some conventional business channels.

Second, in terms of technical services, it is a big challenge to design a biocatalytic route that is suitable for industrialization. Especially the technology of accurately aligning the most suitable biological enzyme is a little bit difficult. In the upstream transformation, enzyme engineering technology is the core, but Existing enzyme engineering is often inefficient and has a relatively long cycle time, which cannot meet the rapid market demand. In addition, some new chemical methods and other biotechnological updates have also brought considerable challenges to the biocatalysis industry.

In addition to the prospects of the above-mentioned industry directions, new changes will also be ushered in bio-enzyme catalysis technology. The first change is full automation. In my contact with some research institutions, I found that more and more biological laboratories are beginning to use automated equipment to implement unmanned laboratory solutions and speed up the improvement of their research and development efficiency. Last year, this professional biocatalysis laboratory in Germany has fully realized the comprehensive automation plan of bioenzyme engineering transformation, and the research and development efficiency has increased by 2-3 times. I think this is bound to be the development direction of the upstream R&D of biocatalysis in the future. 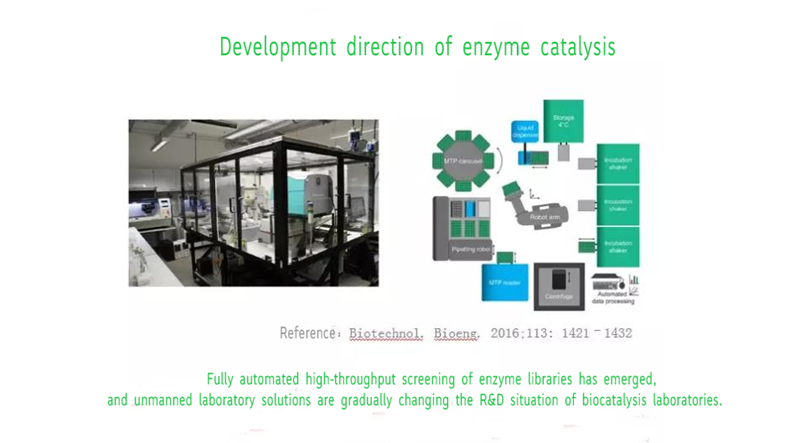 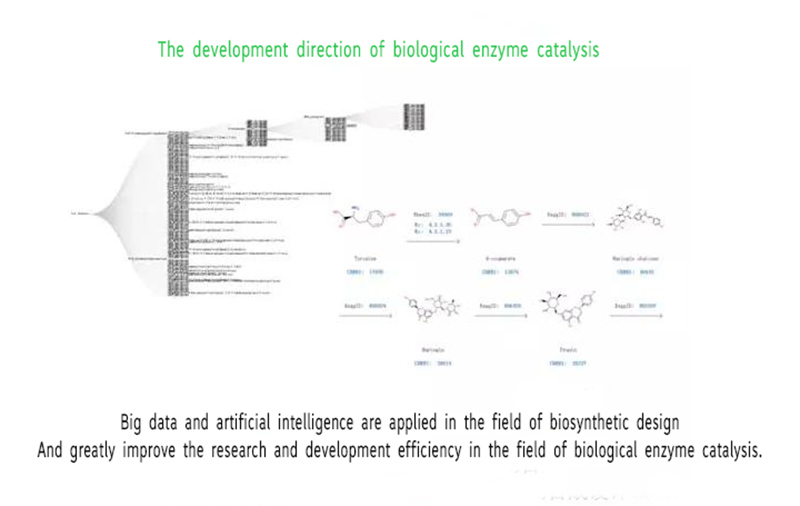 Finally, new biological methods and synthetic biology will also have a positive impact on the development of biological enzyme catalysis technology. From a historical point of view, we have gone through the Five Biological Era of Darwin's period, and then entered the molecular biology era where Watson and Crick revealed the DNA structure of the essence of life. Now we have entered the biological components as functional as assembled circuits. The era of splicing synthetic biology. The biosynthesis of the well-known anti-malarial drug artemisinin uses synthetic biological methods to achieve high-yield expression of artemisinin through yeast biotransformation, and the cost is greatly reduced. In the future, whole-cell biocatalysis based on synthetic biology will have a profound impact on the bioenzyme catalysis industry.