At present, the supplementary precursor of NAD+, as a nutritional product,has been verified for human consumption safety.This achievement provides a simply and feasible new method for improving the anti-tumor activity of T cells.

Cancer immunotherapies including the adoptive transfer of naturally occurring tumor-infiltrating lymphocytes (TILs) and genetically engineered T cells, as well as the use of immune checkpoint blockade (ICB) to boost the function of T cells, have emerged as promising approaches to achieve durable clinical responses of otherwise treatment-refractory cancers (Lee et al., 2015; Rosenberg and Restifo, 2015; Sharma and Allison, 2015). Although immunotherapies have been successfully used in the clinic, the number of patients benefiting from them is still limited (Fradet et al., 2019; Newick et al., 2017). Tumor microenvironment (TME)-related immunosuppression has emerged as the major reason for low and/or no response to both immunotherapies (Ninomiya et al., 2015; Schoenfeld and Hellmann, 2020). Therefore, efforts to investigate and overcome TME-related limitations in immune therapies are of great urgency. 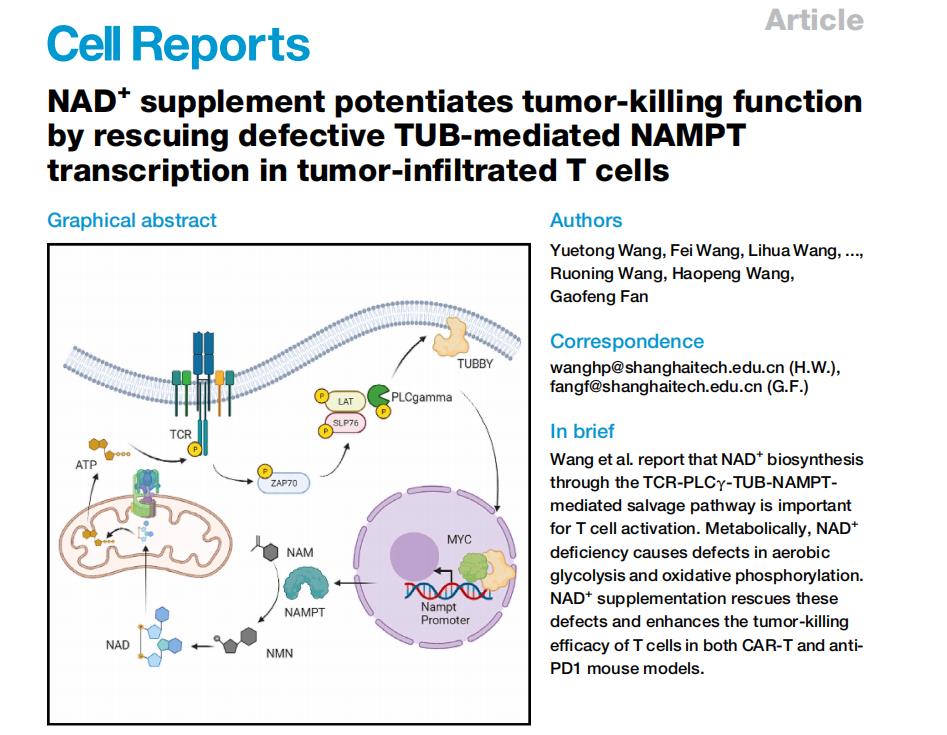 After antigen stimulation, T cells undergo metabolic reprogramming, from mitochondrial oxidation to glycolysis as the main source of ATP. While maintaining sufficient mitochondrial functions to support cell proliferation and effector functions.Given that NAD+ is the main coenzyme for redox, the researchers verified the effect of NAD+ on the level of metabolism in T cells through experiments such as metabolic mass spectrometry and isotope labeling. The results of in vitro experiments show that NAD+ deficiency will significantly reduce the level of glycolysis, TCA cycle and electron transport chain metabolism in T cells. Through the experiment of replenishing ATP, the researchers found that the lack of NAD+ mainly inhibits the production of ATP in T cells, thereby reducing the level of T cell activation. 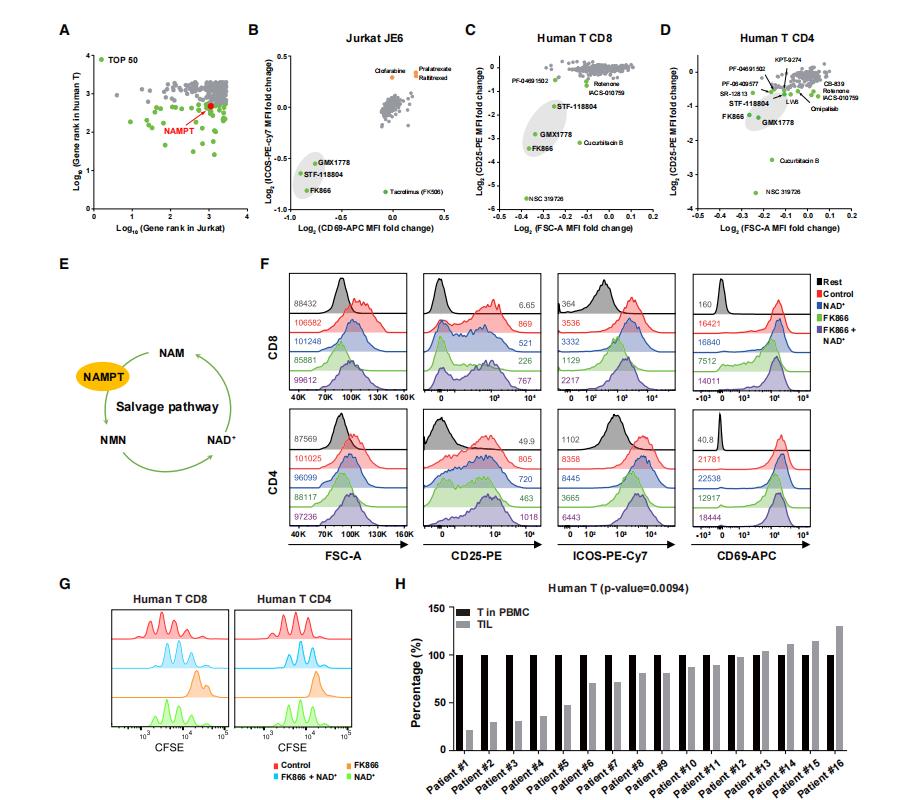 The metabolic reprogramming process regulates the activation and differentiation of immune cells. Targeting T cell metabolism provides an opportunity to modulate the immune response in a cellular way. Immune cells in the tumor microenvironment, their own metabolic level will also be correspondingly affected. The researchers in this article have discovered the important role of NAMPT in the activation of T cells through genome-wide sgRNA screening and metabolism-related small molecule inhibitor screening experiments. Nicotinamide adenine dinucleotide (NAD+) is a coenzyme for redox reactions and can be synthesized through the salvage pathway, de novo synthesis pathway, and Preiss-Handler pathway. The NAMPT metabolic enzyme is mainly involved in the NAD+ salvage synthesis pathway. Analysis of clinical tumor samples found that in tumor-infiltrating T cells, their NAD+ levels and NAMPT levels were lower than other T cells. Researchers speculate that NAD+ levels may be one of the factors that affect the anti-tumor activity of tumor-infiltrating T cells.

3.Supplement NAD+ to enhance the anti-tumor activity of T cells

Immunotherapy has been exploratory research in cancer treatment, but the main problem is the best treatment strategy and the effectiveness of immunotherapy in the overall population. Researchers want to study whether enhancing the activation ability of T cells by supplementing NAD+ levels can enhance the effect of T cell-based immunotherapy. At the same time, in the anti-CD19 CAR-T therapy model and anti-PD-1 immune checkpoint inhibitor therapy model, it was verified that supplementation of NAD+ significantly enhanced the tumor-killing effect of T cells. The researchers found that in the anti-CD19 CAR-T treatment model, almost all mice in the CAR-T treatment group supplemented with NAD+ achieved tumor clearance, while the CAR-T treatment group without NAD+ supplemented only about 20 % Of mice achieved tumor clearance. Consistent with this, in the anti-PD-1 immune checkpoint inhibitor treatment model, B16F10 tumors are relatively tolerant to anti-PD-1 treatment, and the inhibitory effect is not significant. However, the growth of B16F10 tumors in the anti-PD-1 and NAD+ treatment group could be significantly inhibited. Based on this, NAD+ supplementation can enhance the anti-tumor effect of T cell-based immunotherapy. 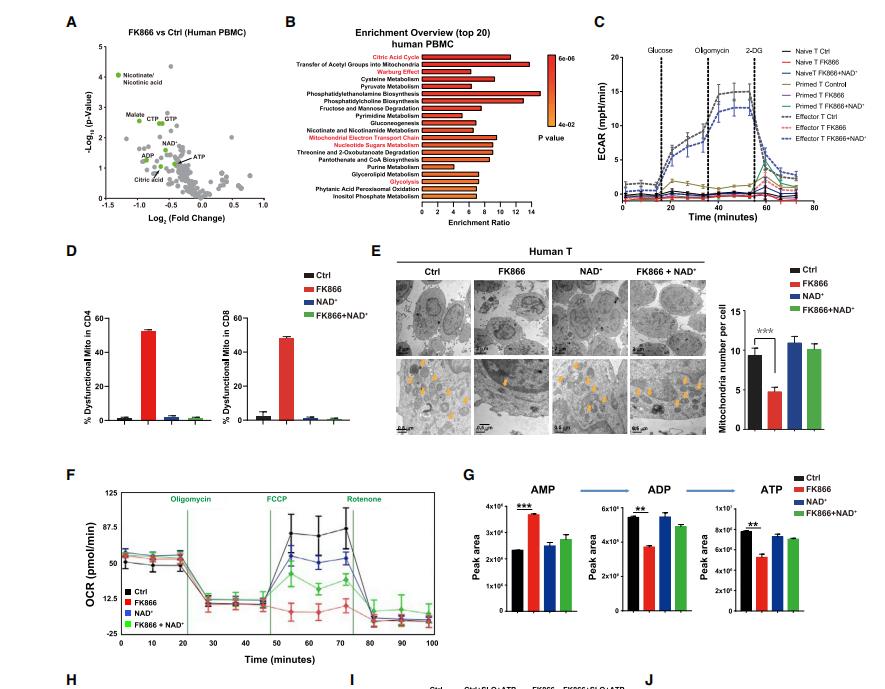 4.How to supplement NAD+

Among the precursors of NAD+, nicotinamide (NAM), NMN and nicotinamide ribose (NR) all synthesize NAD+ through a salvage synthesis pathway, so these three substances have become the body's choice for supplementing NAD+.

Although NR itself has no side effects, in the process of NAD+ synthesis, most of it is not directly converted into NMN, but needs to be digested into NAM first, and then participate in the synthesis of NMN, which still cannot escape the limitation of rate-limiting enzymes. Therefore, the ability to supplement NAD+ through oral administration of NR is also limited .

As a precursor for supplementing NAD+, NMN not only bypasses the restriction of rate-limiting enzymes, but is also absorbed very quickly in the body and can be directly converted into NAD+. Therefore, it can be used as a direct, rapid and effective method to supplement NAD+.